In my last post, I mentioned that we are actively gearing up to buy a farm, make our own hay, and raise sheep full-time.
Yesterday, we went to the Rene Fournier Equipment Auction to search for useful implements for our farm.
Picture a huge lot filled with new, used, and well-used equipment.  A few title-less cars, some random firehouse, a municipal bus, and tractors, rakes, tedders, mowers and other implements of all kinds.  Lawn tractors, skidsteers and chicken coops went up on the block.

And by “block”, I mean they drove a truck around slowly, while a man with sign with a down-arrow that said “Selling this item” indicated various items for sale.  Irreparable items sold for scrap prices, generally.  Manure spreaders went high, and small balers were almost free for the taking.    Antique tractors like this one didn’t even make their reserve and went unsold.

Finally, after hours of watching irrelevant items go by, our desired item finally came up for bid.
We had carefully scoped out the round-baler situation.  Several round-balers were for sale.  One was large and from a company (Gehl) that no longer offered parts for their now-defunct agricultural division.  The John Deere baler we saw seemed likely to go for a high price, and there were two Case balers that would work.  We also noticed a New Idea-brand baler with an electric mechanism for opening the baler hatch and dispensing a bale.  Our tractor only has one rear hydraulic attachment, so that would be a huge help to us – otherwise, we would have to get off the tractor each time to release a completed bale, or we would need to put a splitter on our hydraulic output, slowing both hydraulic operations somewhat.
Matt and I conferred and made a pact-  We knew that a baler on Craigslist would sell for about $4-5000, so anything under $3000 was good, and under $2500 was ideal.  We would bid up to $2500 and then read the lay of the land.  We were ready to come home with nothing, if need be.  We watched some handy limespreaders pass us by for not too much money.  Maybe next time, lime spreaders.
The New Idea baler came up first- not ideal for our strategy, as we would have no sense of competing buyer’s moods for buying round balers before jumping in on the one we would want the most.  But Matt had a secret weapon.  the New Idea had a control panel and a tangle of wires and tubes.  We considered whether the crowd here might opt for something similar…
Bidding started at $4000.  No takers.  It dipped to $3,000, 2,000, and then 1,000, when Matt opened bidding.  Another person we couldn’t see joined in, and they gradually rose until they reached about $2400.  Matt and the other man then slowly bid upwards in $50 increments until Matt bid $2650.  An anxious minute, and then the other bidder relented.  Suddenly, a crowd that had correctly identified us as newbies welcomed us and congratulated us on our purchase.   We watched the Case baler sell for more than $4000, and immediately felt some pride when other farmers said “You bought the better baler, and for less!”
Matt and I drove home happy.  He swapped out of his car and took my truck up to pick up the baler, proud and pleased to own a very vital piece of equipment for less than we had planned to spend. 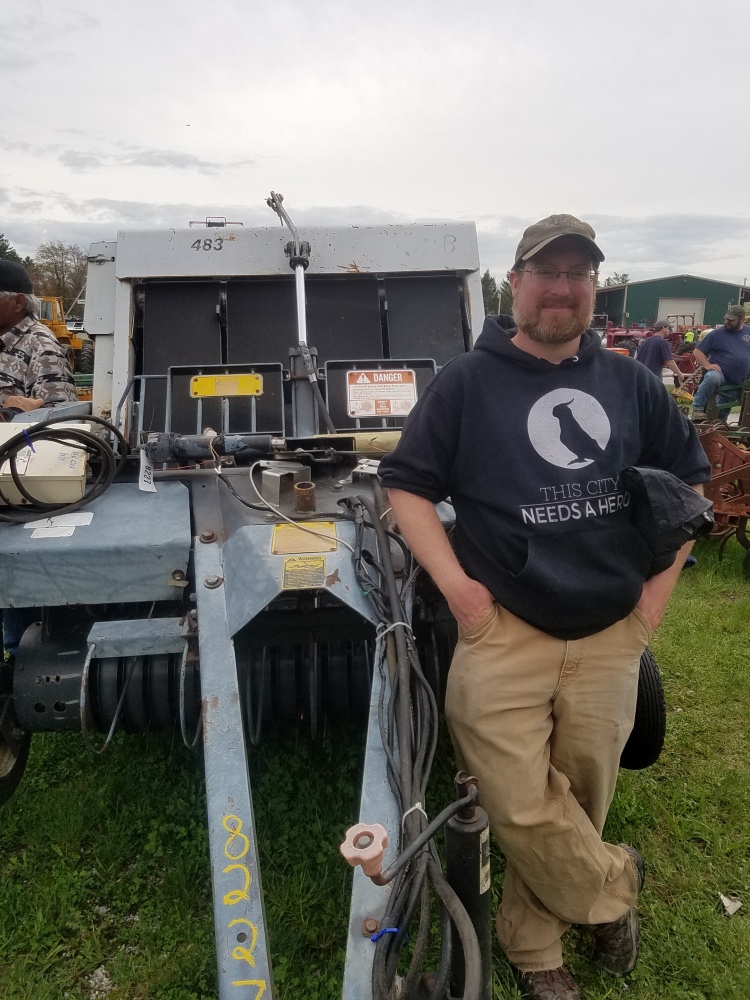 One thought on “Off to the Auction”